A paper on the failure rate of automobiles authored by Sakurai Atsushi, who is the CEO & CTO of Functional Safety Consultant FS Micro (Headquarters: Shibuya Ward, Tokyo, JAPAN) received the Best Paper Award at ISPCE 2017 (2017 IEEE Symposium on Product Compliance Engineering) held in San Jose, California in May 2017.

On 14th, on May 9th morning of local time, a paper authored by Sakurai Atsushi, who is the CEO & CTO of FS Micro Corporation (Head office: Shibuya-ward, Tokyo, JAPAN), functional safety consultant) received the Best Paper Award at ISPCE 2017 (Note 1), an international conference of IEEE (Note 2) held in San Jose, California, from May 8th to 10th, 2017.

Among the 20 formal papers, there is only one to be deserved as the Best Paper Award.

The title of the paper won the Best Paper Award is "Generalized Formula for the Calculation of a Probabilistic Metric for Random Hardware Failures in Redundant Subsystems" related to the PMHF (Note 3).

When performing safety analysis using FMEDA (Note 4) or quantitative FTA (Note 5) in accordance with ISO 26262 which is the international standard of automobile functional safety (Note 6), the failure rate calculation formula relating to the redundant subsystem (Note 7) is unclear, it was difficult to accurately perform quantitative analysis.

It was selected as the Best Paper Award, because it contributes to expand the application of the standard in quantitative safety analysis.

Note 1: 2017 IEEE Symposium on Product Compliance Engineering. International conference organized by the IEEE's Product Safety Engineering Society, once a year from 2004, with regard to product safety.
Note 2: The world's largest academic institute on electrical and electronics engineering headquartered in the United States.
Note 3: PMHF (Probabilistic Metric for Random Hardware Failures) means the average probability of failure per hour over the operational lifetime of the item.
Note 4: Inductive analytical method which quantitatively demonstrates how failure modes of parts affect safety of the whole system using the failure rate.
Note 5: A deductive analytical method that quantitatively demonstrates the possibility of the safety goal violation by calculating the probability using the fault tree.
Note 6: Methodology to ensure system safety by adding various safety measures.
Note 7: Subsystems subject to functional safety, those with redundancy. 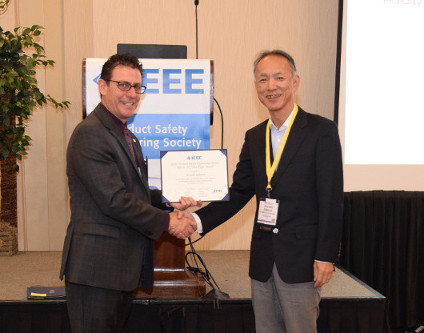